The International Society of Glass Beadmakers annual glass conference, the Gathering, is next week in Las Vegas, and after a year of absences, Double Helix Glassworks will again be there with its very-sought-after test batches! As I have done in years past, I had the honor to create sample beads for Jed and Julie! I think all my glassy friends will be thrilled with these batches so make sure you queue up early Friday morning! 😀

I created  beads from my Enchantment, Dragon Scale, and Celestial Series, along with unencased spacer beads… 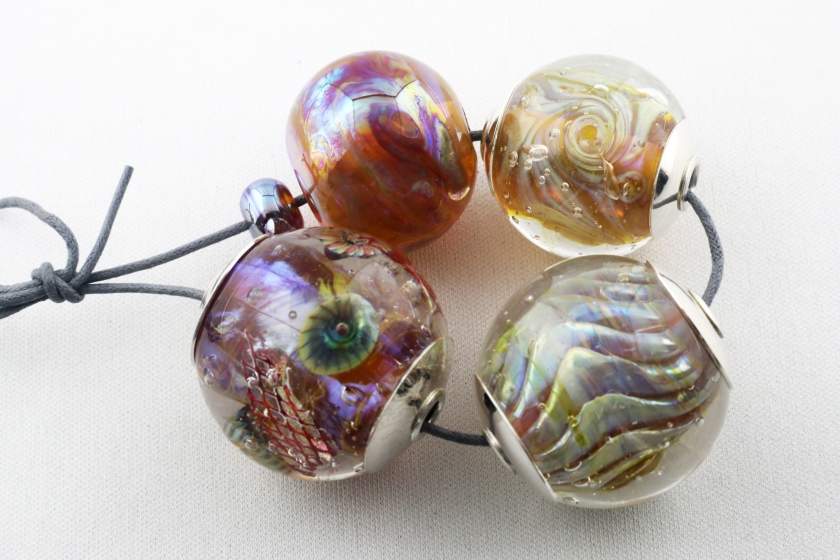 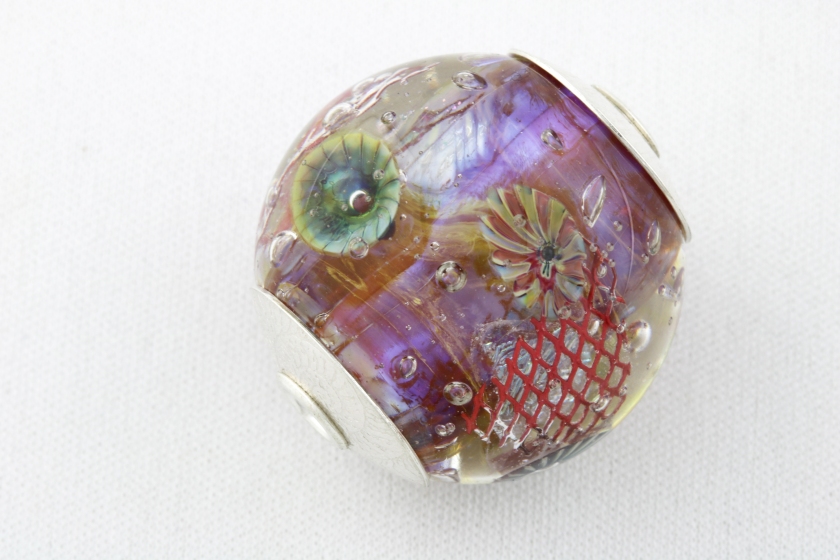 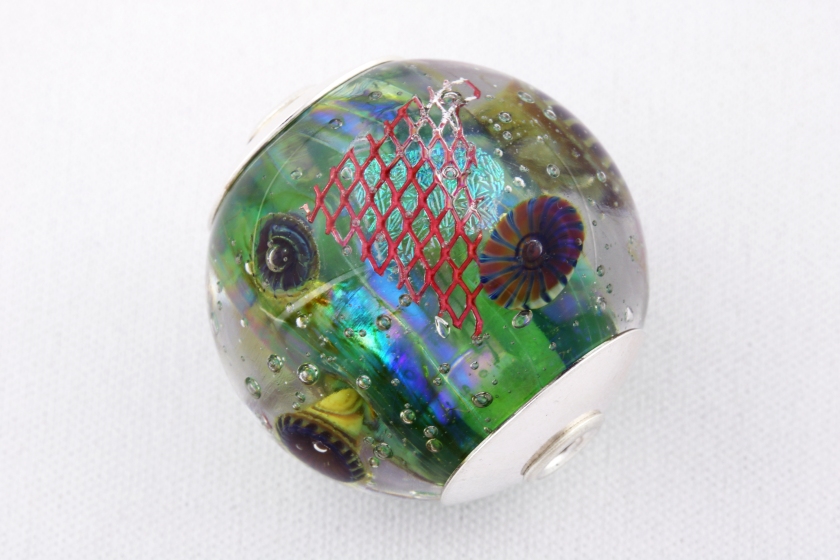 We got pockets! Progress since last update – flap, zipper pocket, and phone pocket (not shown)! Next is the four-inch gusset! Woohoo! 😀

Ever since we watched the Alinea episode in Season 2 of Chef’s Table, it has been on our Bucket List. Getting a reservation at the Michelin 3-star restaurant (one of two in Chicago) was a completely different story, however. So when we were going to head back to the midwest for a special family celebration AND was able to reserve Salon seatings at Alinea, we simply couldn’t resist!

This wasn’t our first rodeo at a top-rated restaurant but what we didn’t expect was how the courses were orchestrated like a performance… and with hidden treasures along the way! In addition to sight and taste, Alinea cleverly integrated another sensory to some of its courses – smell!

The first course was a pear sherbet with roes and shiso leaf along with a spear of romaine lettuce “boat” of vegetables on a lime “pedestal.” 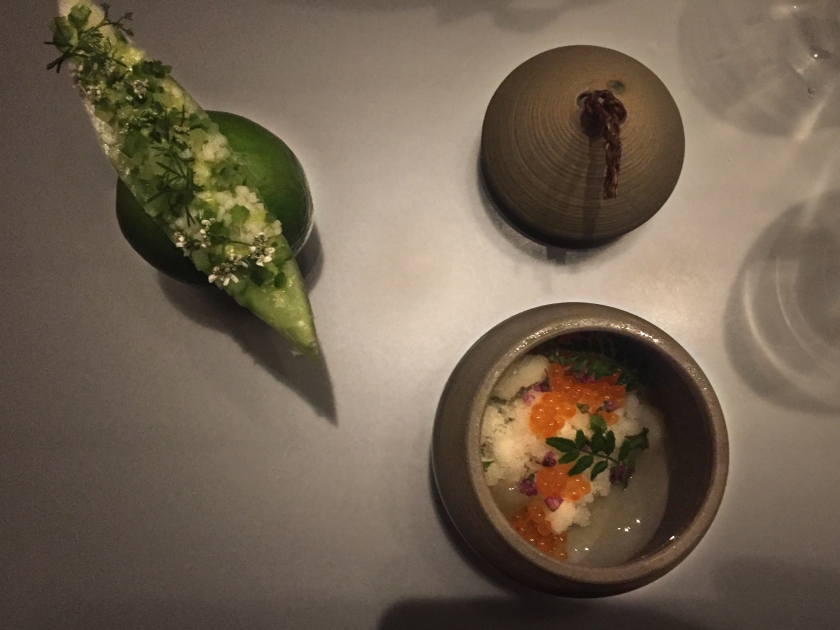 The second course was sweet crab with coconut, curry, and gruyere cheese, under dried savoy cabbage (that has the texture of seaweed/nori), along with encapsulated orange juice. Water was poured into our citrus bowl center piece (dry ice?) and smoke started to fill our table creating the citrus aroma that enhances the dining experience.

Our citrus bowl was replaced with a bowl of salt with grain alcohol that was promptly lit (from smoke to fire!). The squid was served with squid ink butter along with a platter of black “rocks” that yielded two hidden artichoke purée stuffed soft gel olives (those were really yummy).

Can you find our artichoke purée stuff olive gel? They are shinier than the real rocks!

Juniper branches were placed over the bowl to smother the fire creating a smokey aroma to go with my favorite dish of the evening – a translucent piece of langoustine noodle that resembles a piece of rice paper in a bowl of the best bouillabaisse broth I have ever had. We were to submerge the noodle in the broth to reconstitute it and have it with a very crunchy purée black garlic potato (mine was carrot) stuffed nori roll.

And two “eggs” – small venison and pork sausage stuffed donuts – were hiding in the juniper branches!

You can barely see one of the donuts hiding in the juniper branches, it’s slightly to the right of center at the very top of the picture. 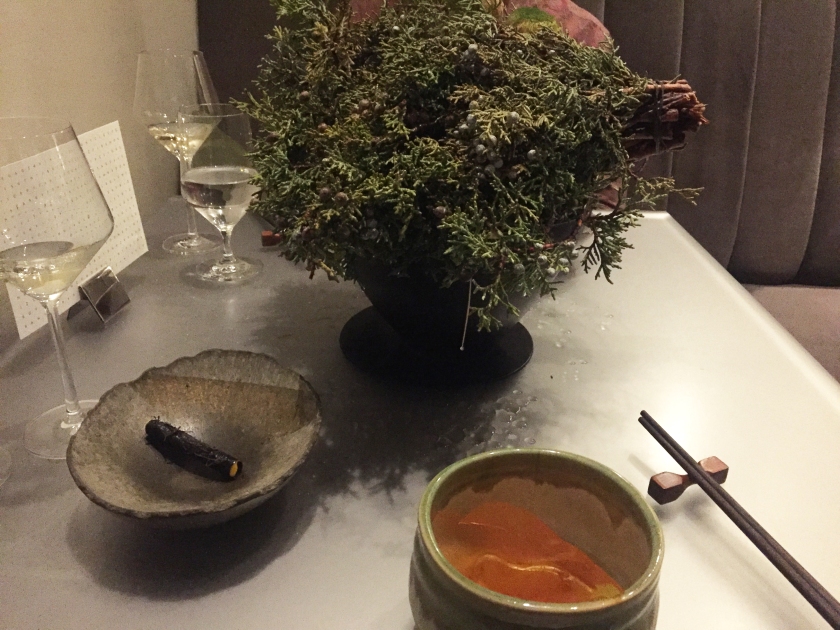 Then we had an interruption. We were told to all stand up and follow the leader down the stairs for a kitchen tour! We were served savory steamed cake (the lightest cake ever!) with mint, allspice and brown sugar, along with apple brandy with pomegranate. 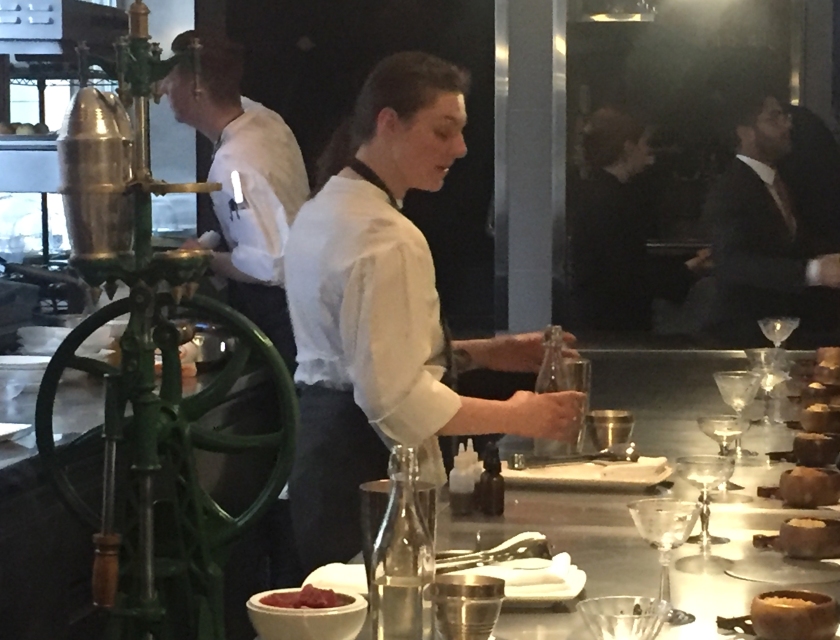 When we got back to the table, the juniper branches were removed and our server prepared the next dish at our table. He first dug up a Yukon Gold potato from the salt, cleaned it off with a brush, mashed it up with butter, chive, parsley, celery, onion, Applewood smoked bacon, etc., and adding to it thick and creamy clam chowder.

Next was Maitake mushroom, foie gras truffle with kale kim chee with raspberry thins and sauce.

The final savory dish was Sonoma squab served under a piece of binchotan charcoal along with black rice “noodles.” On the side was a spiral of beet and a piece of beef jerky masquerading as a vanilla bean.

First dessert was a light goat’s milk honey cake with goat cheese (mine was just olive oil) served with a shot of shiso (red), aloe (clear in the middle) and pineapple (yellow at the other end). We were told to suck from the red side like a straw until we got to the pineapple end. It was delicious! 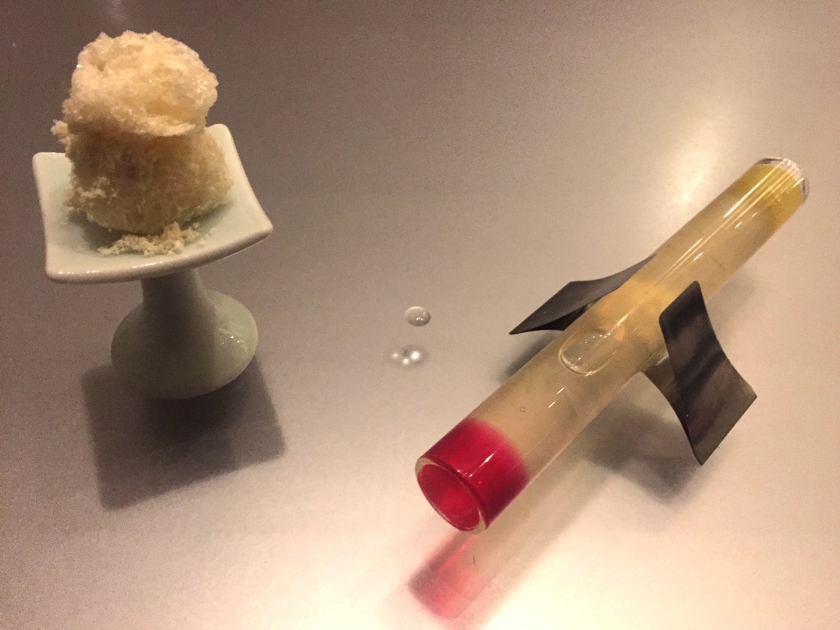 A platter of yummies – cherry blossom, purple sweet potato, miso, chocolate, hazelnut, and etc. Can’t say I was paying that much attention anymore at this point! 😉

Last but not least – S’mores on a stick served on charred birch so a little smokiness was captured in the s’mores, along with a green apple helium balloon. We were told to kiss the balloon and breath in… so I did and spoke with my helium induced squeaky voice!

It truly was a once-in-a-lifetime experience!

A quick update on my tote progress – the front (and back) of the body of the tote is done!